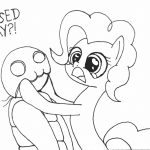 So after the last one, I missed a day. Just after midnight, I realized I had forgotten to draw something.

The next day, Pinkie was upset.

I reached 67 days in a row according to the app I used to track my progress.

Rather than doing some midnight-sketching and pretending it never happened, I decided to take the loss.
The next day I made three daily ponies. One to catch up, one for that day, and one bonus.