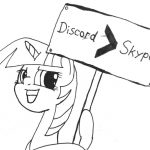 Twilight also thinks it’s time to move on to Discord.

The BroniesNL (aka Dutch Bronies) community has a fairly active Skype group chat, but there’s a new player in town: BroniesNL Discord.
I am firmly in the “let’s all move to Discord” camp, but people are not willing to make the switch.
At first, the few Discord-users have been promoting on Skype with the oft-repeated phrase “Discord > Skype”.
As the number of Discord users, and thus the number of people joining in on the “Discord > Skype” spamming grows, those who still haven’t switched are getting quite annoyed.
The mods would do something about it if it weren’t for the fact that they are also eager to get everyone over to Discord.

This daily pony is the latest piece of propaganda/strategically applied social pressure to get people over to Discord.