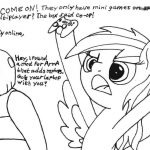 To be fair, it really depends on what platform you’re used to.

Though I do have to admit I’ve become disillusioned with consoles, when I realized that my current collection of 360/PS3 games will only last as long as the machines that play them.
That, and they never added any Timesplitters games to the backwards compatibility roster of the 360. Thank goodness for emulators.