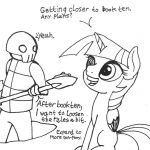 The lengths I go through to make height differences work…

Right now I have the rule that there has to be a pony (or pony-like) in each drawing, but eventually I’ll want to be able to go on non-pony tangents every once in a while. It’ll still be mostly pony, though.

And, who knows, maybe I’ll still be doing dailies in ten years. Or twenty. By then the pony thing would probably be very minor compared to now.